Why Are Engagement Rings Worn On Top of Wedding Bands? 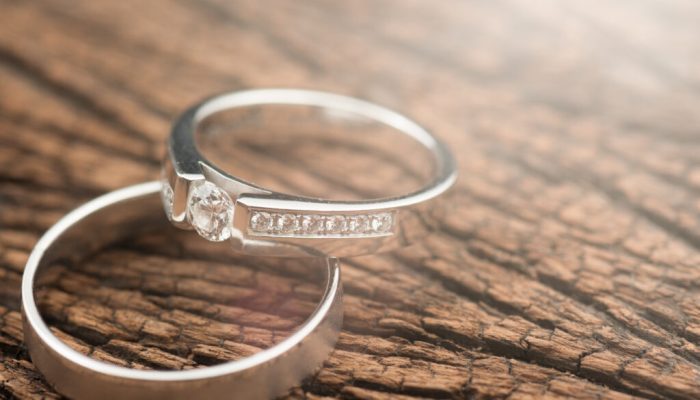 As wedding season approaches, more brides begin to look for a wedding band to match their engagement ring.

There are a lot of traditions involved with wedding rings, so why is the wedding band traditionally worn under the engagement ring?

When did this tradition begin? Continue reading to learn more about the history of engagement and wedding rings.

History of Wedding and Engagement Rings

To understand and appreciate the traditions of ring giving during the marriage, it is best to go back to the beginning.

The Ancient Egyptians are believed to be the first culture that began giving rings as a sign of marriage and commitment.

It is important to remember that this was believed to happen over the course of 4800 years and there may have been other, smaller cultures who had also participated in this practice beforehand.

In 3100 BC, Ancient Egyptians twisted rushes, sedges, and reeds (found growing alongside and near papyrus plants) into little rings to be worn as a decoration on fingers.

These plants were also twisted in other jewelry and decorative accessories for women.

The wedding ring given at the beginning of marriage in Ancient Egyptian culture was very symbolic.

The circular shape of the ring was not only customary to more easily be worn on the fingers of married individuals, but also was a symbol of eternity.

It is meant to show how the bond of marriage is one meant for eternity. There is no beginning or end. It is a continuous round.

As the ring-giving tradition progressed, so did the material these rings were made of.

The plants twisted together to form rings were very biodegradable and were easily broken.

These materials lasted longer, being a better symbol for the never-ending love and commitment that is the marital bond.

As the materials were enhanced, they became a way to show wealth.

The more expensive the material used to make the ring, it was a symbol that the man truly loved the woman who was receiving the ring.

The Romans began to adopt this ring-giving tradition but not for the same reason it was originally created.

Romans gave their woman a ring to wear so that others would know that the woman was already “claimed”.

Wearing a ring given to a woman by a man was a sign of ownership in their culture.

When the Romans eventually switched to making the rings a sign of engagement, the rings were made out of iron.

These iron engagement rings were called “anulus pronubus” and were a sign of strength (hence the iron).

Around 860, Christians around the world began to use engagement and wedding rings as a sign of their commitment.

At first, these wedding rings were dramatic and eye-catching, decorated with engravings of doves and hands.

It was not until the 13th century that the simple wedding band and engagement ring that we know now became a tradition.

Why are Wedding and Engagement Rings Worn on the Fourth (Ring) Finger?

In today’s culture, it is commonly known that wedding bands and rings are worn on the left hand, on the fourth finger.

This is so commonly practiced and accepted that the identifying name most of us know our fourth finger by is “ring finger”.

When did this practice begin and why do we still follow it today?

Throughout the years, wedding bands were worn on various different fingers and even on the right hand.

It was not until the Romans had adopted the idea of wedding rings that the tradition of the fourth finger and left hand began.

This was because the Romans believed there was a vein that went directly from the heart to the left fourth finger.

Women and men began to wear their wedding rings and bands on this finger to show the deep amount of love they had for their spouse.

Unfortunately for the hopeless romantics, scientists have now proven this is not correct.

Despite the scientific discovery, the practice of wearing wedding rings on the left-hand fourth finger has continued.

Why are Wedding Bands Worn on the Bottom?

Wedding bands are worn on the bottom of engagement rings for this reason.

It is believed the wedding band is closer to the heart of the person wearing it when it is worn on the bottom and under the engagement.

This is to show the deep connection and bond of marriage.

While an engagement is a sign of commitment and a future bond, a wedding band is a symbol of the bond made through marriage.

This deeper connection and symbol of eternal commitment is best represented when close to the heart.

Today, it has become more customary for women to have two wedding bands.

These are commonly worn one on the bottom and one on top of the engagement ring.

These are modern twists to the traditional practice. It is important to note that not all women choose to have wedding bands.

Some choose only to have the engagement ring even after marriage.

Other Fingers and the Symbols These Represent

As we all know, the fourth finger is saved and assigned for wedding rings.

Aside from this finger, are there other symbolic reasons for wearing rings on fingers aside from the fourth?

Rings worn on index fingers are a common sign of power in social status. It is meant to be an impacting appearance.

Middle fingers are a sign of responsibility and good fortune when a ring is worn.

Pinky rings may symbolize either a previous marriage or organized crime.