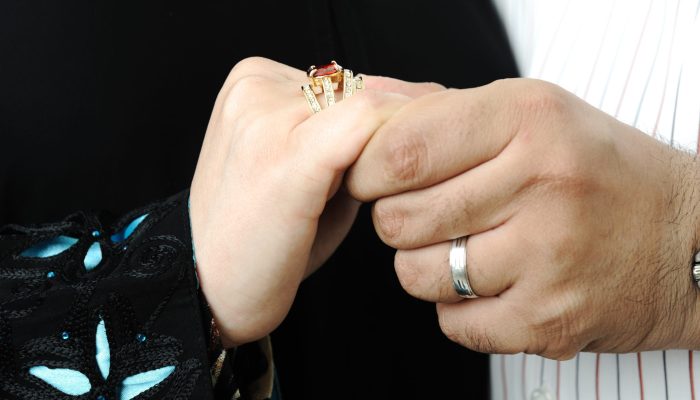 These are the simplest rules, but there is a lot more information to dive into before we have covered all of the rules of engagement rings and the reasons behind them.

Typically in Muslim culture, engagement rings are not used when a couple plans to get married.

This is mainly because dating is considered haram, or sinful, in the culture.

Muslim men and women are not allowed to date before getting married.

Instead, their marriages are arranged and they often meet their to-be spouse a few days before or on the day of the wedding.

This plays a huge part in engagement rings because most couples do not need to have an exchanging of rings if they are going to be married a few days later or the day of.

Engagement rings in Muslim culture have grown in popularity despite this practice.

In the minds of many people, it is not haram to have an engagement ring as long as there are no superstitions about it, so it is not hurting anyone!

There are different rules and reasons in regard to Muslims wearing their wedding ring on their right or left hand.

While we have covered that it is typically better to wear a wedding ring on the left hand, there are reasons for both hands to be considered.

Here is the guide on whether a Muslim should wear their ring on their right or left hand.

Before we get into which hand the ring should be worn on, it is important to cover the other rules about wedding rings.

While women are permitted to wear gold jewelry and pure silks, men are not.

It is haram for a man to wear gold jewelry as it is stated by Allah in the Koran that gold and silk are forbidden to males.

No matter the hand, a gold wedding band is not permitted for men.

The right hand is not the typical place for a wedding ring in most cultures, and that includes Islamic cultures as well.

However, there are reasons why a wedding ring can be worn on the ring finger of the right hand.

The main reason to wear the wedding ring on the right hand is if it is an accessory.

The exception to it being an accessory is in the olden days, if the right hand was used to give stamps or seals, then the ring should be worn on the left.

The prophet wore his ring on his right hand, so that is typical when it is an accessory.

For the bride, she should wear her wedding ring on her left hand.

That is typical and traditional of Islamic culture, so they often follow those traditions.

While a man has the freedom to wear his ring or not, he is encouraged to if he wants to make his wife happy.

Women also wear it to make their husbands happy, but they have less of a social choice whether they wear it or not.

The left hand is the preferred hand for wedding rings to be worn on.

It has been stated to be better to wear the ring on the left hand by Hanafi, Maliki, and Hambali, which are different sects of the Muslim or Islamic culture.

Besides what has already been mentioned in the right-hand section, there are no special rules about the left hand.

It should be the default hand that a wedding ring goes on, and it is typically on the ring finger of the left hand.

Exceptions to the Rules

While these rules are pretty clear, there are a few exceptions to them that we will go over.

These exceptions are related to the nature of the man’s line of work, and the location that the couple is in.

If a man works in a job where he uses his hands or gets dirty often, he can wear the wedding ring on whatever hand will provide him with the least obstruction to his work.

The main concern and reason for this is so that the ring does not get damaged because it is such an important symbol.

If the ring is in danger of getting dirty or being damaged differently when it is on the left hand, the man is permitted to wear it on the other hand when doing work.

The other exception is where the couple is. If they are in any place besides Jordan, then they should abide by all of the previously mentioned rules.

Any other part of Islam or the world recommends the rings be on the left-hands of the couple.

But in recent times, a lot of Muslim couples opt to exchange rings during the wedding ceremony.

What is the Muslim Wedding Ring Finger?

Traditionally, wedding rings are typically worn on the ring finger of the left hand

Traditional in Muslim culture, engagement rings are not used when a couple plans to get married. In Islam, men and women are not allowed to date before getting married.