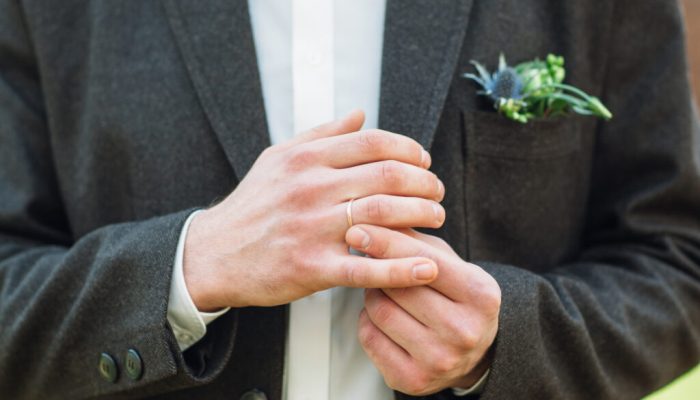 People have a lot of little habits and signals that sometimes have deeper meanings.

When you see or hear of someone doing something abnormal, your curiosity can begin to overtake you. For instance, why do men twist their wedding bands?

Twisting a ring around your finger for some may simply be a bored or nervous habit. For some married people, twisting your wedding band or ring around can either symbolize to others you are married or can be a reminder for themselves of their commitment.

If you spotted your husband twisting his wedding band, you may wonder if it means anything.

Continue reading to hear more about what twisting rings and wedding bands symbolizes.

Spinning or twisting rings is something all people may do, regardless of their marital status.

In this case, it is a fidget they do when bored or nervous. Fidgeting is a common thing all people experience.

This is when your body does small movements, usually with your hands or feet.

It is a way your body helps you become more alert by increasing your physiological arousal.

Fidgeting usually occurs when someone is bored or nervous.

Doctors and scientists have been unable to come to an obvious conclusion on whether fidgeting helps the person to stay focussed and on task, or if it the effect of a wandering mind.

In fact, fidgeting with rings is such a common thing that companies have begun to sell “fidgeting jewelry”.

This jewelry usually has a spinning or clicking component that allows the wearer to discreetly fidget.

As this type of jewelry is becoming increasingly more popular, many companies are creating their own versions of fidgeting jewelry.

Symptom of an Attention Disorder

For those who have been diagnosed with an attention disorder, fidgeting with rings may not simply be a fidget, but a symptom of your disorder.

Signaling Your Commitment to Your Spouse

Wedding rings and bands are a symbol of the never-ending love and commitment you have made to your spouse.

Even the ring itself is never-ending (a loop).

Wedding rings are not only given to spouses as a symbol of their love but also as a sign to the world that you have committed yourself to someone.

Despite the commitment you have made to your spouse, there may be people who do not respect that and will try flirting with you.

Twisting your wedding ring may draw extra attention to it, giving a silent signal to the other that you are married and are not interested.

While talking to married men, I heard many stories of women coming up to them in an attempt to flirt, and men spinning or drawing attention to the wedding band to hopefully signal to the woman they are already taken and are not interested in having a romantic relationship with them.

Out of the stories I have heard, there are times that women notice the ring twisting and back off, while there are also stories of women who seem to either not notice or not care.

In cases like that, simply twisting your ring may no longer be enough of a signal to turn them down.

Reminder to Themselves of Their Own Commitment

Feeling attracted to someone is a common and normal emotion for people to experience.

This issue even arises when you are married and feel attracted to someone aside from your spouse.

When people run into this situation, their wedding band is no longer a reminder to others of your own commitment but has now become a reminder to yourself.

While reading through some women’s experiences, I heard of many where a married male boss or coworker noticeably twists their wedding band around attractive women.

In most of the experiences I read, women were expressing how although they would prefer the man to not be attracted to other women aside from his wife, they respect the man for reminding himself of his commitment.

Signal to Others That They Want to do Something Rebellious

Unfortunately, marriage does not always go the way people intend on it going.

Affairs and cheating on spouses are, unfortunately, somewhat common.

Another reason a man may be twisting his ring is using it as a signal to the woman he is flirting with that although he is married, he wants to have an affair with her.

This is used almost as a way to flirt with the woman and tell her to tempt him.

This is the man’s way of letting the woman know he may be interested in having an affair, but he is almost telling her it is now her turn to make a move. The ball is in her court.

Because of the multiple potential meanings of ring twisting, you won’t want to jump to any conclusions about what this behavior might mean!

Signal to Others That Their Marriage is Open

Everyone has different rules between themselves and their significant other.

For some, having an open relationship in marriage works for them and is something they are both consenting to.

Polyamory means having more than one current romantic relationship.

People engaging in a polyamorous relationship are all in agreeance of the specifics of their relationship.

Many polyamorous wedding bands are black and worn on the right hand instead of the left.

This is a signal to others who are aware of this custom that their relationship and marriage are open.

If a man has a black wedding ring on his right hand and is twisting it, he is most likely letting someone know that his marriage is open.

This is a signal to make your move, because they may have the possibility of joining their polyamorous relationship.

In cases where both spouses agree and consent to an open marriage, it is often not viewed as cheating to have a romantic relationship with someone else.

PrevPreviousThumb Ring: The Definitive Guide (Everything You Need to Know)
NextWhat is the Difference Between Tungsten and Titanium Wedding BandsNext